In the previous Recipe, we discovered that in my sample county, the largest group of children entering foster care for the first time are infants. Because they are such a large subgroup of entrants, the next thing I really want to know is how long they spend in foster care compared to children who enter at older ages. This will tell us a lot about the extent to which my system’s resources are being devoted to infants.

This Recipe will take you about 5 minutes to complete.

Below are the results from the county I analyzed: 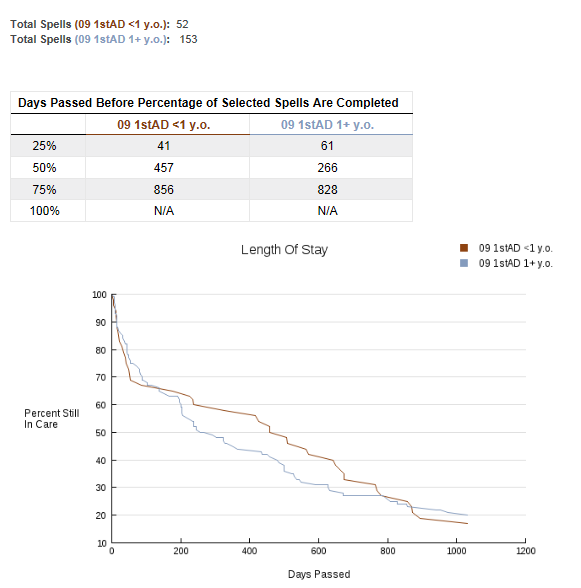 Recall that in the previous Recipe, the Profile Report told us that 52 children entered care as infants in this county in 2009—this is confirmed for us here at the top of the length of stay output, where we see that 52 spells were returned for the group of entrants under age 1. The quartile table shows us that children who entered as infants had a much longer median length of stay (457 days) than children who entered at age 1 or older (266 days).

Below that, the survival graph shows us that before about the 100-day mark, the infants actually exited care at a slightly faster rate than the older children (the brown line falls just below the blue line), but that after that point, the rate of exit for infants slows down greatly, and older children exit the system faster (the lines cross and the blue line falls below the brown line). Slowly, the rates of exit converge, but it is only at about the 800-day mark that the lines cross again, indicating that after this many days in care, the infants who remain in care actually start to exit at a slightly faster rate than their older cohort members.

In the previous Recipe, we learned that in this county, infants represent a relatively large proportion of children entering foster care, and that their numbers have been growing. In this Recipe, we discovered that infants also stay in care longer than children who enter care at older ages. As we think more about what to do for this group, we need to learn more about their unique characteristics. What else can we learn about the experience of these infants and how can that information help us tailor an intervention that will improve permanency for them? Click to the next post to find out.